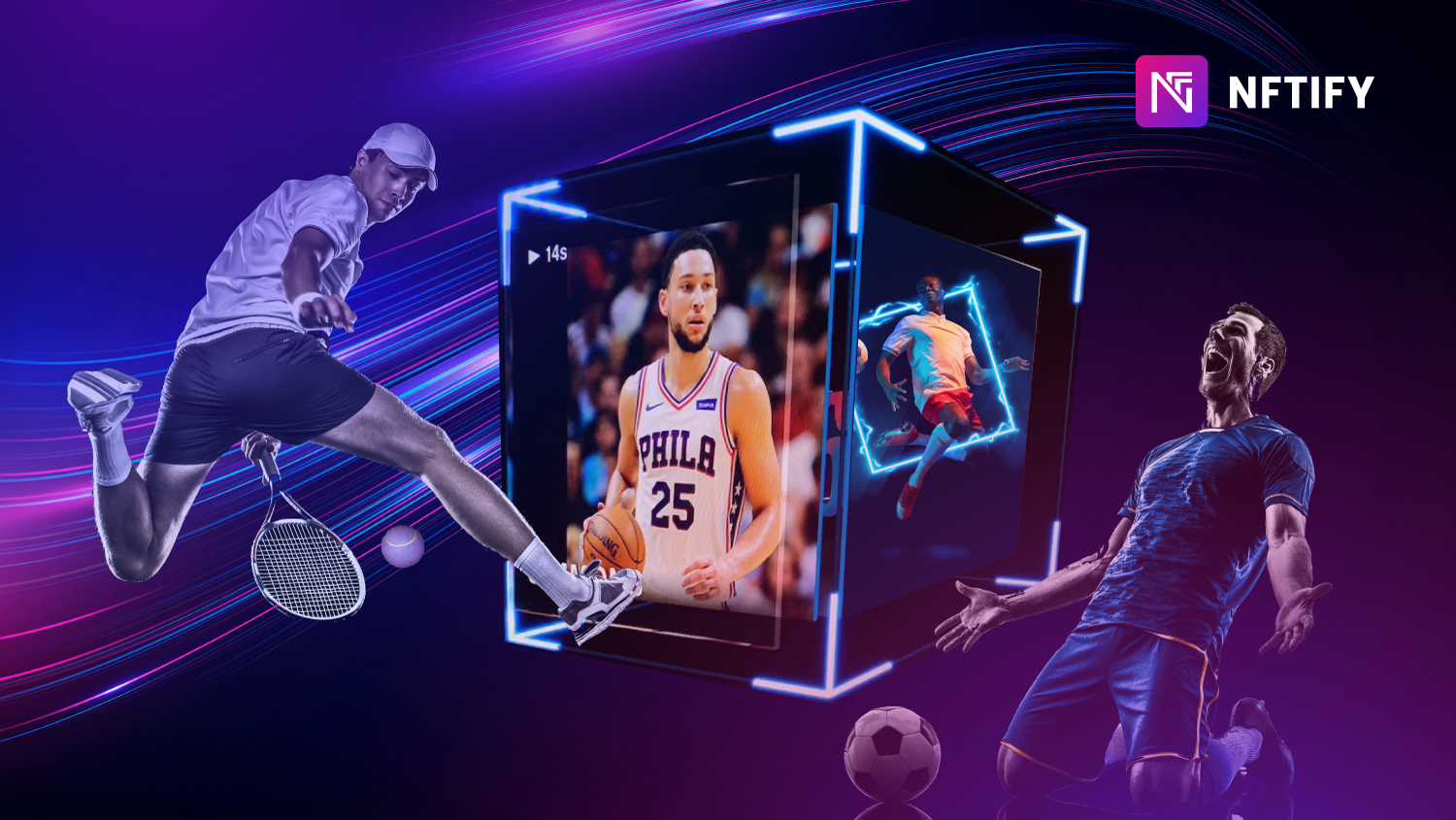 What Is NFT Sports?

What Are The Use Cases of NFTs in Sports?

TOP 10 Remarkable or The Most Popular NFT Sports

Sell Your Sport NFTs On NFTify

Since last year, crypto exchanges have been inking partnerships with various international sports teams and tournaments. Recall how Coinbase became the official crypto partner of the NBA and Binance sponsored the just concluded Africa Cup of  Nations Tournament.

At the moment, the sports industry is moving beyond crypto to explore the other subsets of blockchain technology – particularly NFTs. Manchester City opened the floor last year when it launched its first NFT collection to celebrate winning the Premier League.

Ever since then, various sports teams have dabbled into NFTs. With the look of things, Deloitte predicted that NFT sports will hit over $2 billion before the end of this year.

What Is NFT Sports?

Sport NFT simply refers to the applications or use cases of non-fungible tokens in sports. This includes both indoor and outdoor games. In essence, sport NFT deals with tokenizing some sport-related items on the blockchain and selling them to the fans.

What Are The Use Cases of NFTs in Sports?

Memorabilia are remarkable items that remind people of historical or striking moments about a match, sportsman, or event. NFTs are useful in tokenizing these iconic moments.

The National Basketball Association was the first sports association to popularize NFT sports memorabilia when it partnered with Dapper Labs to launch NBA Top Shot.

NBA Top Shot sells short NFT video clips of breathtaking moments during American basketball matches. One of the classic highlights of Stephen Curry in a match against the Toronto Raptors was sold for $10k.

Apart from basketball, other sports are also leveraging NFTs to preserve their memorabilia. The NFT featuring how Jake Paul knocked out Nate Robinson was also sold for $10 million as memorabilia.

Studies show that 55% of sports fans often fall victim to online ticket fraud. This might not only disqualify the fans once they are caught, but it also reduces the number of revenues that sports teams make from matches.

But NFT sports tickets are solving this problem. As items on the blockchain, NFTs can neither be manipulated nor duplicated. This is the reason the organizers of sports events are using NFT tickets.

For example, the National Football League in partnership with Ticketmaster issued NFT tickets to the attendees of this year's edition of the Super Bowl.

Apart from that, physical sports tickets have tendencies to get lost or wear off, but that is not the case with sports NFT tickets. Meanwhile, these NFT tickets can also become tradable NFT cards in the future.

3. Revenue Channel For The Team

Sports teams have various ways of generating revenues including advertisement and sponsorship. Now, the additional channel that sports teams utilize to generate revenues is by launching their NFT collections.

Liverpool recently launched its first NFT collection “LFC Heroes Club" which contains the visual illustrations of its 24-star players. This particular NFT collection is expected to bring a return of over $11 million.

Meanwhile, you should also bear in mind that the teams won’t only make revenues upon the first sales, but they will also receive some percentage of royalties on subsequent sales.

4. Involvement of the Fans in Decision-making

The fans are an integral part of any sports team. Therefore, they should also be carried along in making decisions concerning the club. NFTs can give the supporters an avenue to vote and say their opinions on;

This works in such a way that your vote would carry more weight depending on how many NFTs you have or how rare your NFTs are.

However, there are quite no case studies about this at the moment because sports teams mostly use social tokens in decision-making. But this will soon include NFTs.

Some months back, Crystal Palace leveraged the blockchain for its supporters to vote on inspirational messages in the dressing room, kit designs, and even squad numbers.

Almost every sports team has a charitable way of giving back to society. They often do this to assist or help underprivileged people in society.

Nowadays, sports teams are using some proceeds from their NFT collections for charitable donations. Sometimes, they also launch NFT collections that are solely dedicated to charity.

A couple of days back, Liverpool launched a “Charitable” NFT collection with the first proceeds and 10% of future royalties pumped into helping “life-changing charitable and community projects.”

Similarly, the people in charge of Kobe Bryant’s website are planning to launch an NFT in honor of the legendary basketball player.

They noted that the collection should bring in about $50 million which they will use for funding Mamba & Mambacita Sports – Kobe’s foundation for underserved athletes and kids.

TOP 10 Remarkable or The Most Popular NFT Sports

This NFT is arguably one of the best shots of LeBron James, a top-notch basketballer in the history of the NBA, with a 5k full resolution. The buyer will not only get the NFT but the RAW file after closing the transaction.

The Statue of LeBron NFT is presently being auctioned at 10,000 ETH which is around well above $32 million. With the auction still ongoing and closing on the 19th of this month, there are chances that there will be higher bids.

As a way of giving back to society, 50% of the NFT will be donated to “I, Promise” – an NGO with a primary focus on homeless people.

Kobe Bryant, popularly called the Black Mamba, is one of the most revered basketballers who has also inspired a lot of basketballers across the globe. Unfortunately, he died in 2020 at the age of 41.

But before his death, Kobe tweeted congratulating LeBron James on his achievement the night before. Since that was his last tweet, it became memorabilia. The tweet was reported to be worth almost $2 million.

The Golden State Warriors, an award-winning California-based basketball team in the NBA, in celebration of its sixth NBA championship auctioned one of its rarest championship rings on OpenSea and it sold for $871k.

According to the announcement, some parts of the funds will be allocated to the Warriors Community Foundation which is focused on youth development and education among thriving students.

After Stephen had broken an NBA record at Madison Garden Square last year, he proceeded to launch the “2974 NFT collection” which sold for over $2 million. In his interview with the Press, Stephen noted that 100% of the revenues made from the collection will be used to fund the “Eat. Learn. And Play” initiative.

The “Eat. Learn. Play” initiative is a foundation that Stephen founded in conjunction with his friend, Ayesha Curry. The foundation is presenting malnutrition among children, and equipping their education and an environment to reach their full potential.

Although Oleksandra’s NFT might not be among the most expensive ones, it is one of the most brilliant sports NFTs and it might set a precedent for sportsmen to adopt in the future.

The popular 20-year-old Croatian tennis player sold an NFT that is backed by the space on her right shoulder. Such that whoever purchases the NFT can demand any graphic or tattoo to be put there – more particularly, it can also be an advertisement.

She eventually auctioned it on OpenSea for 3 ETH.

With every athlete jumping into the NFT trend, Naomi was among the first set of players that brought NFTs into tennis. Her collection consisted of only 6 rare NFTs and they all sold for $600k.

Meanwhile, one of the NFTs in the collection was purchased for over $200k – thus, being the highest single NFTs to be sold by a tennis player to date.

Erling’s NFT was among one of the most expensive football NFTs as it was auctioned for 265 ETH – around $870k as of the moment of writing.

Apart from being an NFT memorabilia, the NFT can be used as an in-game character in Sorare’s fantasy football game.

📌 Related topic: NFT Games, Beyond The Hype: What You Should Know Before Dabbling Into NFT Games

Tyson, a renowned boxer who has ended bouts with 22 bouts with knockouts, recently launched his NFT where he was holding his two championship belts across his shoulders.

The NFT was sold on NFT Marketplace for almost $1 million. The eventual buyer received the physical painting of the NFT, memorabilia of Tyson's glove, and a short personal video from Tyson.

Gronk compressed four of the most thrilling moments of his career into NFT editions as memorabilia for his fans.

The NFTs came with some perks including exclusive access to Gronk.

These NFTs were eventually auctioned for 860 ETH which is close to $3 million.

Lionel Messi, the football Greatest of All Times with seven Ballon D’or awards and a total of 758 goals, was shown in an NFT clip playing a flaming golden ball. The NFT was released on the Ethernity Chain and it was eventually sold for 3,000 ETH which is around $9.8 million.

NFTs are set to make the sports industry more profitable than ever before. PwC predicted that digital assets like NFTs might form the major way by which most leagues and teams generate revenues.

In the same vein, NFTs will be a touchpoint for sports teams and fans to closely interact. In the future, the club's NFT might be a prerequisite to receiving bounties from the team, just like the holders of Bored Apes received the airdrop of $APE.

Against this backdrop, it is high time more sports teams and sportsmen flood into the NFT space to benefit from the financial gains and also knit a stronger connection with their die-hard fans.

Sell Your Sport NFTs On NFTify

At NFTify, our mission is to help various sportsmen, teams, and leagues to kickstart and quickly launch a lucrative NFT business.

With NFTify, you can build your own NFT storefront easily within minutes and upload your NFT collections all at once without coding or a hefty upfront investment.

At the moment, some major sports brands including Rage.fan used NFTify to build their sport NFTs storefronts.

⭐️ Take your sports career and business to the next level by launching your sport NFT marketplace on NFTify now.
Be a part of the NFTify community on Telegram, Twitter, Youtube

7
Related Post
Start selling NFTs
with NFTify today
Launch your own NFT Marketplace in the
matter of hours, without a single line of
code or any upfront cost.
Join our weekly digest!