What are NFT Cards, How to sell your NFT trading cards? | NFTify
NEW
Your NFT marketplace, crafted by expertsExplore Concierge Service

What are NFT Cards, How to sell your NFT trading cards? 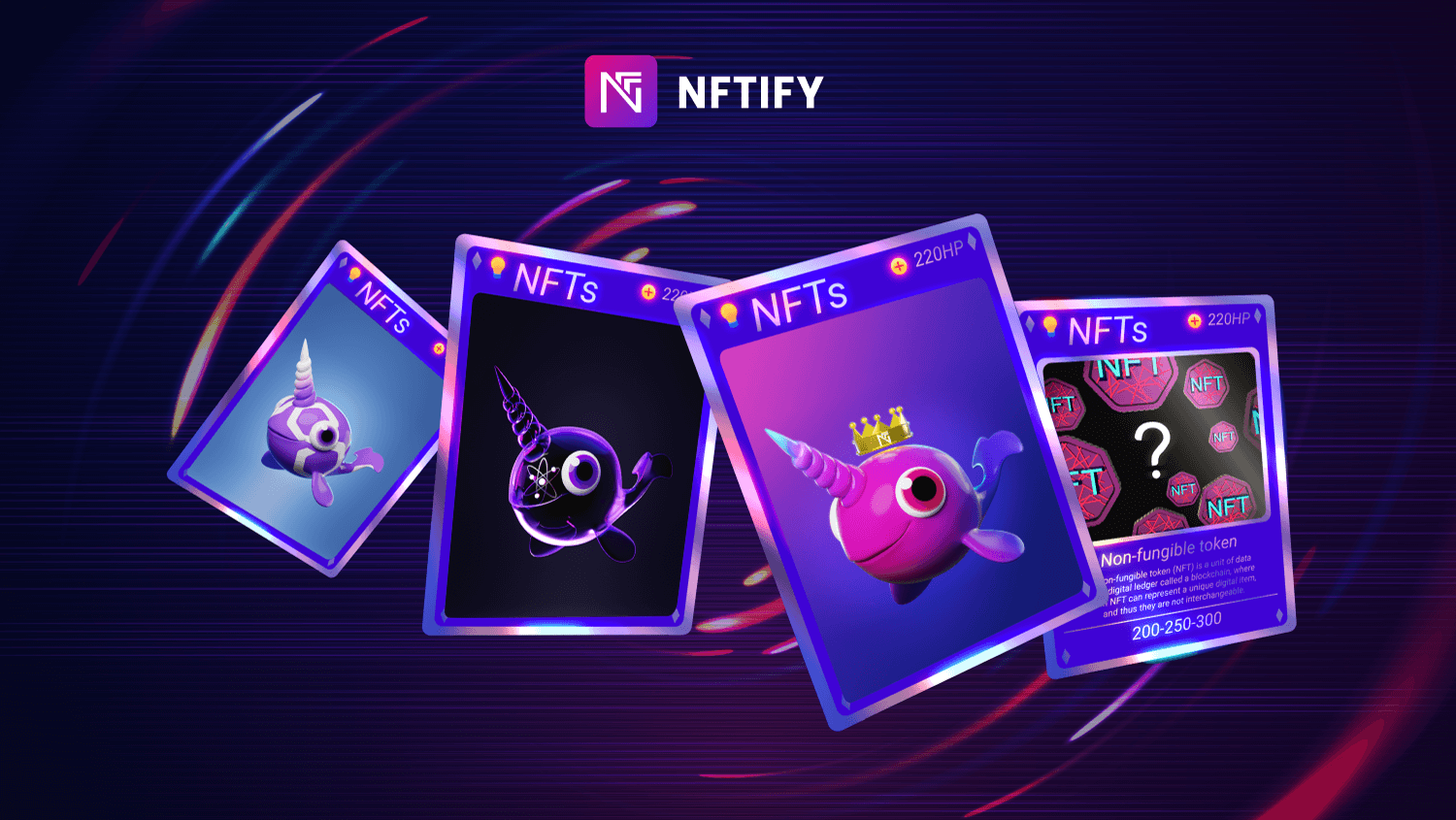 What Are NFT Cards?

What Are The Concerns for NFT Trading Cards?

How NFT Cards Will Improve The Trading Card Ecosystem

Will NFT Cards Be The Vogue In The Future?

Should You Create NFT Cards?

Trading cards have always been a popular way people own the collectibles of their celebrities or favorite sportsperson. According to CNN, a rookie card of Micheal Jordan still sold for $738k at an auction last year.

However, it's ironic to note that the entire traditional trading card system has been experiencing a continuous regression in demand over the years. The laser focus is now on NFT trading cards.

At the moment, NFT cards are gaining more popularity and are fast replacing the traditional game card system. Among other things, the mas adoption of NFT game cards was fast-tracked with the popularity of play-to-earn.

On February 1st, 2022, the NFT playing cards system recorded a new whopping transaction when someone bought the NFT card of Erling Haaland, a Norwegian footballer, for $600k - currently the most expensive NFT card.

Thus, traditional game card collectors have mixed feelings about the bullish move of NFT trading cards. First, some of them are still in the dark regarding what NFT cards mean and how they work.

Secondly, they want to know if NFT cards have the potential to eventually replace the usual tangible trading cards. In this blog post, we will address these pressing issues and answer all your questions about NFT cards.

What Are NFT Cards?

NFT cards are digital trading cards that exist on a blockchain network. Thanks to blockchain technology, people can verify the authenticity and ownership of NFT trading cards.

In the '90s and early 2000, trading cards were thick paper—fairly thicker than cartons—with pictures and a brief description of popular footballers.

With time, trading cards—became digital and—were incorporated into video games where the players can buy the virtual version of these players and use them in games.

Back to NFT playing cards, they are virtual pictures of popular pictures of footballers, basketballers, or in-game characters. On a keener look, NFT cards are recorded on a public ledger called the blockchain.

That is, each of them is made up of distinctive codes on the blockchain. Most times, they are always 3D NFT cards so they can be used as in-game characters.

But are all NFT cards sports-related?

No, only that the game cards are more pronounced. For example, there are also NFT birthday cards and NFT greeting cards.

What Are The Concerns for NFT Trading Cards?

At the moment, NFT is still classified as one of a hi-tech invention. As a result, an average man doesn't understand the complexities of NFTs - its token standards, processes of NFT minting, blockchain networks, buying MATIC to buy on Phantom, and so on.

In the same way, most of pokemon players couldn't cope with this paradigm shift because they found it quite foreign. Thus, the barrier of technicality keeps them from crossing to NFT trading cards.

Unlike physical cards, NFT cards are not tangible; you can't touch and see them in real life. Meanwhile, hobbyists often like the art of curating a physical catalog of their cards.

Some believe that NFTs are only valuable on the blockchain and thus have no value in real-time. Therefore, they feel disconnected from the concept of NFT game cards.

3. More Focus on Money-making Than The Cards

The motive behind any activity will spell the approach towards it. Some are of the view that NFT card collectors are more after the money than the importance of the cards to them.

According to Forbes, traditional trading card collectors often have experiential connections with the cards. The cards may remind them of a match they would never forget or their favorite sportsperson.

Thus, they don't often buy them with the main motive of selling. On the other hand, some NFT traders who are collecting cards are purportedly there to flip them without considering any emotional attachments.

How NFT Cards Will Improve The Trading Card Ecosystem

While some hobbyists may have issues with NFT trading cards, it is without a doubt that NFT cards are set to improve the trading card system.

These are the ways NFT cards will improve the collectible industry:

Card collections have always been physical and hobbyists would collect them to have memories of their top sports moments or players. But there were reports of trading cards getting lost or wearing out.

Even when there were digital ones, the games could crash and that would be the end. There can also be a problem with delivery. In 2019, there was an issue where someone bought a pokemon card for $60k but it was never delivered at all.

This cannot be the case with pokemon NFT cards because they will land straight in your NFT wallet. On this note, NFT trading cards appear to be a far better mode of storing collectibles. NFT cards are stored on the blockchain and no one can tamper with them.

Trading card natives would agree that the problem of ownership has been from time immemorial. In virtual card games, the manufacturing company only gives you access to these cards.

You are not the owner because these cards are on their central server and you don't have custody of it. As a result, you'd lose this access if—for whatever reason—you have issues with your account.

But the NFT cards work differently. When you buy a trading card, you will own it. It will only be in your custody and no one else's.
For example, it was clear that a Sorare user called Camembert bought the Ronaldo trading card because the card can be traced to his wallet address on the blockchain.

Any game card that you buy in traditional video games can only function in those games. That is, the in-game characters cannot be used even in a similar game.

This fundamental flaw impedes the fun in these games as the players cannot explore and have cross-game experiences.
But unlike their traditional counterparts, NFT digital cards can be useful in more than one game. EverDragons2, for instance, is a dragon game that can be used in games on other chains like Tron and Ethereum.

Once NFT card games are based on the same token standards, then they can have a cross-chain functionality.

Most physical card collectors often do it for fun. This is because not many people are interested in buying it. As for digital trading cards, there are already stipulated prices for them. Thus, making card collection quite an unprofitable venture.

But NFT playing cards have turned the story around; gamers can sell their cards to a ready market for thousands of dollars. This takes card collection a little step higher from being only a hobby to a huge source of income.

According to the BBC, someone bought the trading card of LeBron James for over $5 million. Bearing in mind that LeBron is a legendary basketballer, the person who bought can later resell it for even double that amount.

Will NFT Cards Be The Vogue In The Future?

NFT digital cards seem to be in vogue now, but will they still be valuable in the future?

From the look of things, the world is gradually disembarking from the current technologies and onboarding into blockchain technology. As a result, NFT cards will replace the traditional card collection system.

As we have discussed above, NFT cards have stronger advantages over both physical and virtual cards. This is evident in the way people are now spending more money on them.

Moreover, insider reports have it that the popular Nintendo is keen on incorporating NFT playing cards in the near future.

But all the same, some hobbyists still rebut that NFT cards can't replace physical cards because people often have emotional attachments to the latter.

Should You Create NFT Cards?

Hearing the news of how NFT cards are selling for millions of dollars will make you curious to consider whether or not you should also create NFT cards.

First, you should know that what gives value to cards is their rarity. If the NFT card you want to create is too common or basic, it will most likely be the case that you won't make a profit.

Using Axie Infinity as an illustration, Axies with rare traits sell for higher prices because they can do more than what an average in-game character is capable of.

Secondly, consider your personality and popularity before creating your NFT cards. You might not necessarily be popular worldwide, but you must be popular and accepted in your niche.

This is important to drive out genuine demand when you have created your NFT card. For example, the NFT cards of popular players like Rashford, Zidane, Ronaldo, and Messi will always be of a higher market value.

All in all, don't create NFT cards because of only the possible monetary returns. Create it because you want to connect more with your fans or community.

Yes, NFT cards are the next big thing, but where is the best place to sell and buy them? The answer is, NFTify. We will explain:

At NFTify, we empower creators and businesses to have an NFT store of their own where they take charge of their NFT business. Our platform helps you to express and establish your brand in a scalable manner.

We know that the technical barrier of NFT is keeping a lot of people from selling and buying NFT trading cards, that's the reason we have built a platform that an average card collector can easily navigate.

Marketing is essential in NFT, so we have built-in marketing plugins to aid your sales. Similarly, NFTify has a sound analytics system where you can track the number of people who clicked on your store as well as your revenue index.

And no, we won't leave you hanging if you have issues with your store, our 24/7 customer success team is always available to attend to you. Build your scalable NFT store today.

12
Related Post
Start selling NFTs
with NFTify today
Launch your own NFT Marketplace in the
matter of hours, without a single line of
code or any upfront cost.
Join our weekly digest!