Music NFTs - How NFT is changing the music industry? 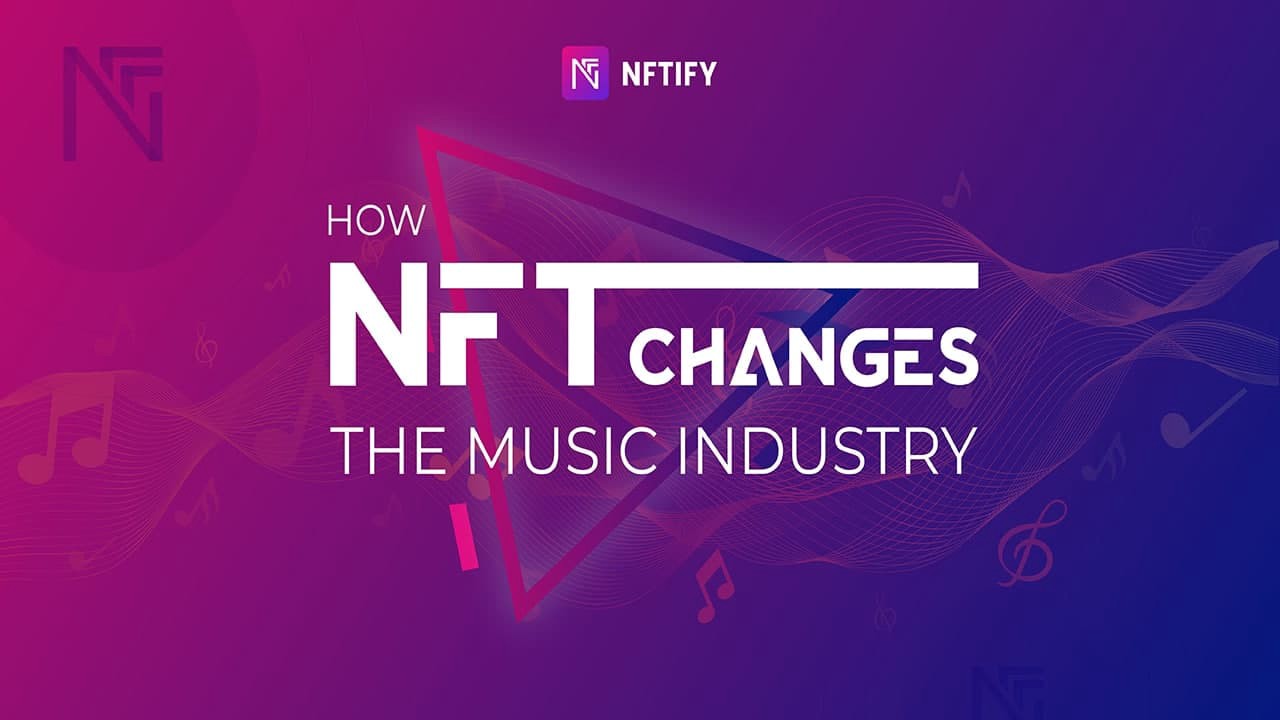 How NFT is changing the music industry

How can NFT help fans to live out their dream?

Music NFT as the source of inspiration

How to make and sell music as NFT?

The music industry is one of the vibrant subsidiaries of the entertainment industry. According to Statista, the global music industry recorded almost $62 billion in total revenue last year.

From history, music has always evolved with man. Music was played with gramophones in the '90s, this is unlike now when people stream and download music.

Following this trend, the music industry took a revolutionary turn last year when artists were creating music NFTs. Kings of Leon, an American rock band, were arguably the first to mint an album as an NFT.

While music NFTs might be becoming the order of the day, it is challenging the traditional structure of the music industry. This disruptive nature of music NFTs is pointing to an important question:

"Will music NFTs take over from streaming platforms and record labels?"

A musical production has several parts: the video, sound recordings, the beat, the cover design, the album, the lyrics, the song, and the IP rights. All these several parts can be minted—or created—and bought as NFTs.

Music NFT is simply collectible audio files. In reality, there is no exhaustive list of what a musician can mint as an NFT.

How NFT is changing the music industry

Embracing multi-million-dollar value, the music industry presents a lucrative business in the entertainment field. Celebrities get into business with a plethora of music videos, live stage, and world tours. All shows us the glamorous and alluring picture in today’s age.

📌 Explore Mariah Carey Fly With Me NFT - a private jet to the Songwriters Hall of Fame Induction Ceremony!

However, after a period of time, the revenue from the music sales has decreased significantly. At that time, music streaming services emerged and blew a wind of change in the music world.

Along with the success that music streaming brings to the whole music industry, many controversial concerns arose around royalty payment. Many streaming services get money from subscription fees and advertising. When a song is played on a streaming platform, the revenue is distributed to the streaming parties, the music publisher- the songwriter, and the record label. The record label then shares the revenue with the artist. Accordingly, the artist only receives a portion of the revenue.

However, the appearance of music NFT projects helps artists to earn more profit from their valuable artworks.

The music creators build NFT store and sell their products on that. They can sell almost any innovative products related to their work such as songs, photography, exclusive concert pictures, album images,… directly to their customer without sharing the profits with other parties.

Aside from getting money from initial sales, the artists also keep a share of revenues from future sales.

🔎 For instance, if someone buys their NFT item for 10000$, the artists can designate that sale so they can keep 10% of all future sales. Thus, they will get the 10% every time the sale happens in this NFT. That means they don’t need to do anything at all and still see their profit growth.

The role of music NFT is largely recognized as many famous artists are no strangers to the NFT platform.

Music NFT is developing fast and introducing new possibilities in the entire music industry. Here are the current use cases:

According to the New Republic, almost 90% of music sales come from streaming. Meanwhile, records have it that artists often get around $5k to $7k for 1 million streams.

Popular musicians like Tom Gray and Nadine Shah have aired their displeasure—and those of their other colleagues—about the rate streaming platforms pay them.

Since artists claim the income they get from streaming is not worth it, research shows that the only major way through which they generate income now is through concerts and other performances.

Fortunately, the NFT music industry is becoming a game-changer for most musicians. Some are making up to 10X the ideal revenue they expect from streaming platforms off music NFT.

There is a deep emotional connection between musicians and fans, and NFT music is bringing them closer than ever before. Music NFT allows the fans to buy and own any musical clip or item of their favorite musicians.

Since every NFT is unique, this gives the fans the special treatment of owning the property of their musicians. This is a dream come true for most fans. Sometimes, music NFTs are accompanied by having a brief moment with the fan for a shout-out or a short discussion.

In an interview with Daily Nation Today, Daniel Allan narrated how he spends up to six hours a day conversing with his fans on his NFT Discord community.

On the Discord channel, he gets to answer some of the questions his fans have, listen to their feedback, and any contributions they have to make. Not long ago, Daniel sold 50% of his royalties to his fans for 50 ETH.

According to the BBC, only 13% of royalties get to the artists. Meanwhile, 30% or even goes to the record labels. The other percentages are shared among retailers, producers, promoters, and publishers.

A lot of artists have found this allocation unfair since they are the ones at the core of productions. This was the major reason David Marks, an ex Beach Boys guitarist, sued Universal Music Group last year.

Fortunately, music NFT has changed the tides for musicians. Unlike before when musicians would subdivide the royalty percentage—which is always between 5% to 10%—among labels and producers, they now have it all to themselves.

This has helped a lot of musicians to receive a payment that is commensurate with their creativity, thereby fueling their passion to do more.

Musicians make most of their revenues from holding and performing at concerts. However, CNBC reported that 12% of the people who buy concert tickets online always get fake tickets.

What these frauds do is quickly buy up almost all the concert tickets from the original, thereby forcing people to buy the tickets from the secondary markets where they'd sell fake tickets to them at higher prices.

But NFT ticketing would be bringing authenticity to music concerts, this is perhaps one of the most exciting use cases of NFT in the music industry.

Earlier this month, Coachella announced that it will be selling NFT tickets which will grant the holders lifetime access to their yearly festivals.

Swedish House Mafia, a music group, announced last year that it would be minting NFT tickets for its concert this year's summer.

How can NFT help fans to live out their dream?

Other than giving artists a fair commission, NFT technology also gives the fan a platform to get closer to their idols. Even though NFTs are digital tokens, they still present real-life experiences, activities, or physical items.

🔎 For instance, NFT music fans can purchase the exclusive meeting with idols backstage, have a photo picture with them, and get the concert live video and unique pictures,…

Otherwise, the NFT platform can record the fan’s public data on the blockchain and personalize the fan experience. Fans could achieve their non-fungible token badges to prove their status and commitment to a band or artist.

Strikingly, fans with NFT status can have some access to an exclusive meet-and-greet with the artist and some special VIP rights.

In fact, many artists employ NFTs to create one-of-a-kind experiences for their fans.

Admirers of “Someone you loved” vocalist — Lewis Capaldi certainly felt happy when he decided to launch a set of NFT ticket experiences offering the fans to join an exclusive journey with him, including private in-person meetings, access to the backstage tour,…

Other famous celebrities- Tennessee rock band Kings of Leon also made NFT sales of their album “When you see yourself”, coupled with the “Golden Ticket” auction. The NFT sale offers fans four front-row seats on every King of Leon tour for life.

Another way for fans to connect with their artists is via the Defi platform. The Defi musical platform provides a pool for investors and music supporters to allocate their money.

The smart contract will automate the interest repayment and direct profit to the investor, this interest rate will be much higher than the banks. Aside from getting interest rate payments, fans and investors can also receive exclusive rewards such as gig tickets, backstage passes,…

On the other side of the pool, the artist can borrow money out of the pool and invest it into their musical production scheme. They don’t have to borrow from the bank which requires a lengthy and sophisticated process.

Loans from the DeFi lending platform will be given to the artists based on their past streaming revenues with copyrights. Accordingly, Defi platform provides win-win solutions as the fan can get the interest rate payment and other exclusive rights while artists can easily get access to the loan for funding their musical activities.

Music NFT as the source of inspiration

NFT is a flourishing land for artists to utilize and deploy their music production and marketing strategy. These musical outputs are the innovation without boundaries, ranging from the musical unique experience, physical products, to digital creation.

The music supporters, therefore, have more entryways to interact with their idols and manifest their tremendous adoration among artworks. In the meantime, artists can also earn a vast amount of money from selling their NFT exclusive items.

Thus, NFT, albeit a novel field, still develops vividly in the musical industry down the road because of the huge potential it brings to the music endeavor.

How to make and sell music as NFT?

With the bullish rise of music NFTs, NFTify has proved to be the best NFT platform to create and sell your music NFTs.

This number of music NFT store built on NFTify is multiplying because we grant independent musicians the ability to kickstart their own NFT storefront and make limitless revenues for themselves. It's easy to set up a store on NFTify: signup and connect your wallet.

Then you can select your preferred blockchain network—among BSC, Ethereum, and Polygon—and upload your music NFTs. For musicians who already have their NFT for music on other NFT marketplaces, you can simply import the collection to your NFTify store once and for all.

If you like teamwork, you can have your collaborators with you on your NFTify store. As the main owner of the store, you'd have the power to dictate how many collaborators can have access to the store and how much revenue each can receive.

14
Related Post
Start selling NFTs
with NFTify today
Launch your own NFT Marketplace in the
matter of hours, without a single line of
code or any upfront cost.
Join our weekly digest!