10 NFTs of Classic Memes that Sold for A Lot of Money | NFTify
NEW
Your NFT marketplace, crafted by expertsExplore Concierge Service 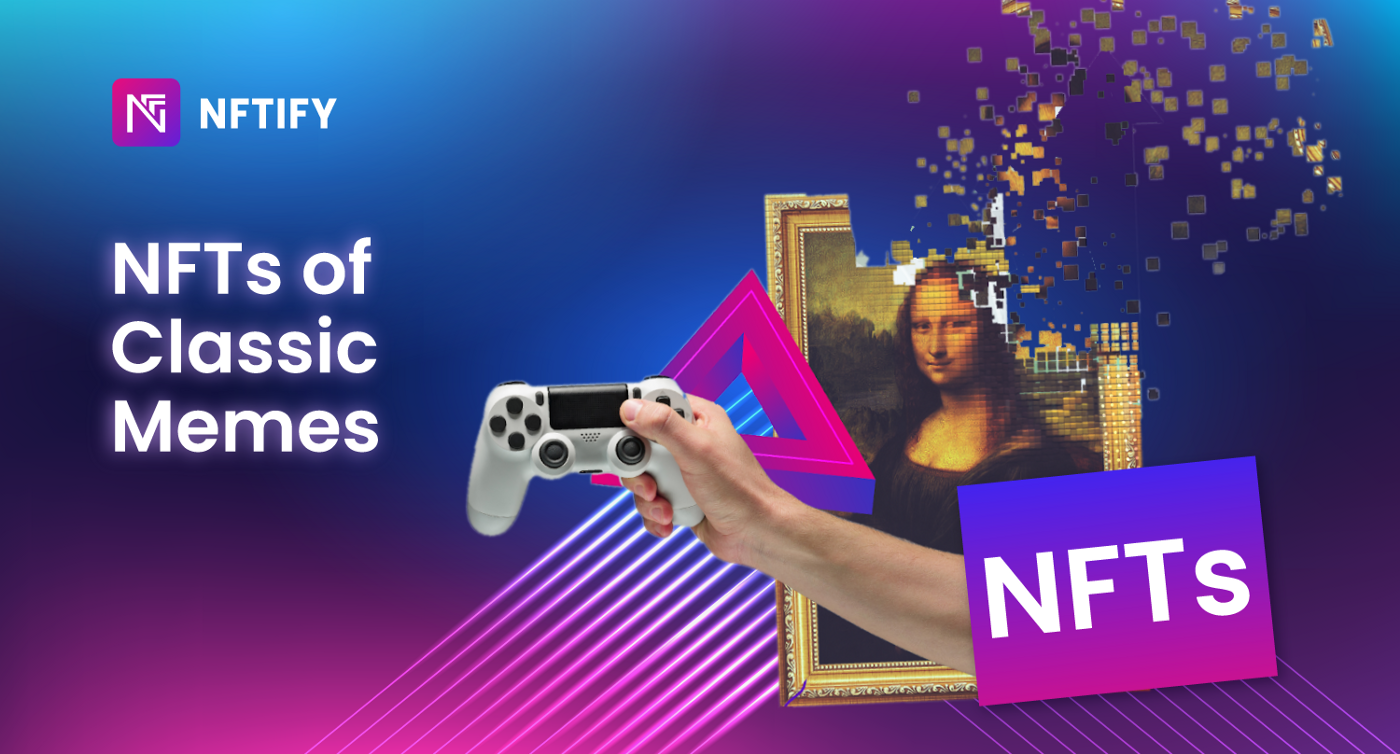 It’s no exaggeration to say that the NFT market has exploded in 2021. As the year began, NFTs had generated a little over $162m, while as of November, sales have reached an incredible $11bn.

One of the reasons NFTs gained a lot of mainstream attention this year is that some of the most famous internet memes were sold as NFTs — with a few earning their owners a small fortune in the process.

In this post, we take a look at 10 classic NFT memes that made their owners a lot of money by selling these NFTs.

Photographer Laney Griner took a photo of her 11-month-old son Sammy by the beach back in August 2007. She uploaded it to Flickr and the image of the fist-pumping toddler with an adorable expression of triumph became internet-famous as Success Kid.

Chris Crocker (now Cara Cunningham), uploaded “Leave Britney Alone,” to YouTube in 2007 — gaining 2m views in 24 hours. It continued to generate views until it eventually gained mainstream attention: the first viral video to do so.

Although Crocker was mocked, and even bullied, for the video at the time, he was vindicated in his passionate defense of Britney when he sold the video as an NFT for 18.6942 ETH ($43,000) in April.

Bad Luck Brian (real name Kyle Craven), became the poster boy for misfortune back in 2012, when his friend uploaded his photo onto Reddit with the caption “Takes driving test…gets first DUI”. 6 months later, and the meme had spawned 100,000 variations, captioned with a variety of embarrassing or unlucky events.

The man known as Scumbag Steve is actually called Blake Boston, and the original photo was taken by his mother back in 2011. Better still, the photo came from the cover of an album by Blake’s rap group Beantown Mafia.

Grumpy Cat (real name — Tardar Sauce) became wildly popular after her owner posted an image of her unimpressed expression on Reddit in 2012. Grumpy Cat grew into a beloved cultural icon — becoming a best-selling author, starring in her own movie, and getting her a waxwork figure at Madame Tussaud’s — the first cat to receive such an honor.

Originally submitted as a video in a Justin Bieber fan contest, Overly Attached Girlfriend is the famous meme of the clingy girl wearing a disturbing facial expression that’s become known as the “OAG stare”.

Although the creator Laina Morris was always in on the joke, now she’s laughing all the way to the bank, as the NFT of her meme sold for 200 ETH ($411,000) in Ethereum in April.

In 2005, Dave Roth took a photo of his daughter Zoe smiling mischievously near a burning house and entered it into a magazine contest. The image became an instant hit, inspiring lots of memes of Zoë standing in front of other famous disasters.

Nyan Cat, aka Pop Tart Cat, was created by artist Chris Torres during a charity drawing event in 2011. Chris submitted the eclectic drawing as GIF to a comic site, where YouTuber saraj00n set it to catchy music and put it on loop. The video went on to become iconic — reaching over 248m views.

To celebrate Nyan Cat‘s 10th anniversary, Chris sold an improved GIF of the meme as an NFT, and it sold for 300 ETH, worth $590,000, in February. Better yet, Chris created and sold more NFTs based on the original meme, earning a total of 559 ETH — nearly $2.5m at the time of writing!

The YouTube clip of toddler Charlie Davies-Carr, chomping on his brother Harry’s finger and laughing, is one of the original, and most famous, viral videos, generating almost 900m views.

Almost 15 years later, an NFT of the video sold for $760,999 in an online auction in May and the original video was removed from YouTube (though copies still exist).

In 2010, kindergarten teacher Atsuko Sato posted a few pictures of Kabosu, the Shiba Inu she’d rescue-adopted. Soon afterwards, one particular picture of Kabosu wearing a curious expression spread all over the internet and the “Doge” meme was born — eventually inspired the multi-billion-dollar Dogecoin and Shiba Inu cryptocurrencies.

When the owners of these NFT memes first created and uploaded them, they had no idea how much they’d be worth one day.

With this in mind, just how profitable could your ideas for NFTs be? NFTify gives you the chance to find out for yourself by allowing you to create your very own NFT whitelist memes and NFT marketplace for these memes — with no upfront costs.

With NFTify, you can make money from your memes by effortlessly turning memes into NFTs. You can also create NFTs from Games, photos, collectibles, and all types of digital media: Music, and Artwork. Best of all, setting up a customized NFT marketplace is simple, so you can start selling your meme NFTs within minutes.

→  Sign up for your free NFT marketplace today or, if you want to find out more about selling NFT memes or other digital media on NFTify.

1
Related Post
Start selling NFTs
with NFTify today
Launch your own NFT Marketplace in the
matter of hours, without a single line of
code or any upfront cost.
Join our weekly digest!