Web2.5: The NFT-powered transition to the new internet 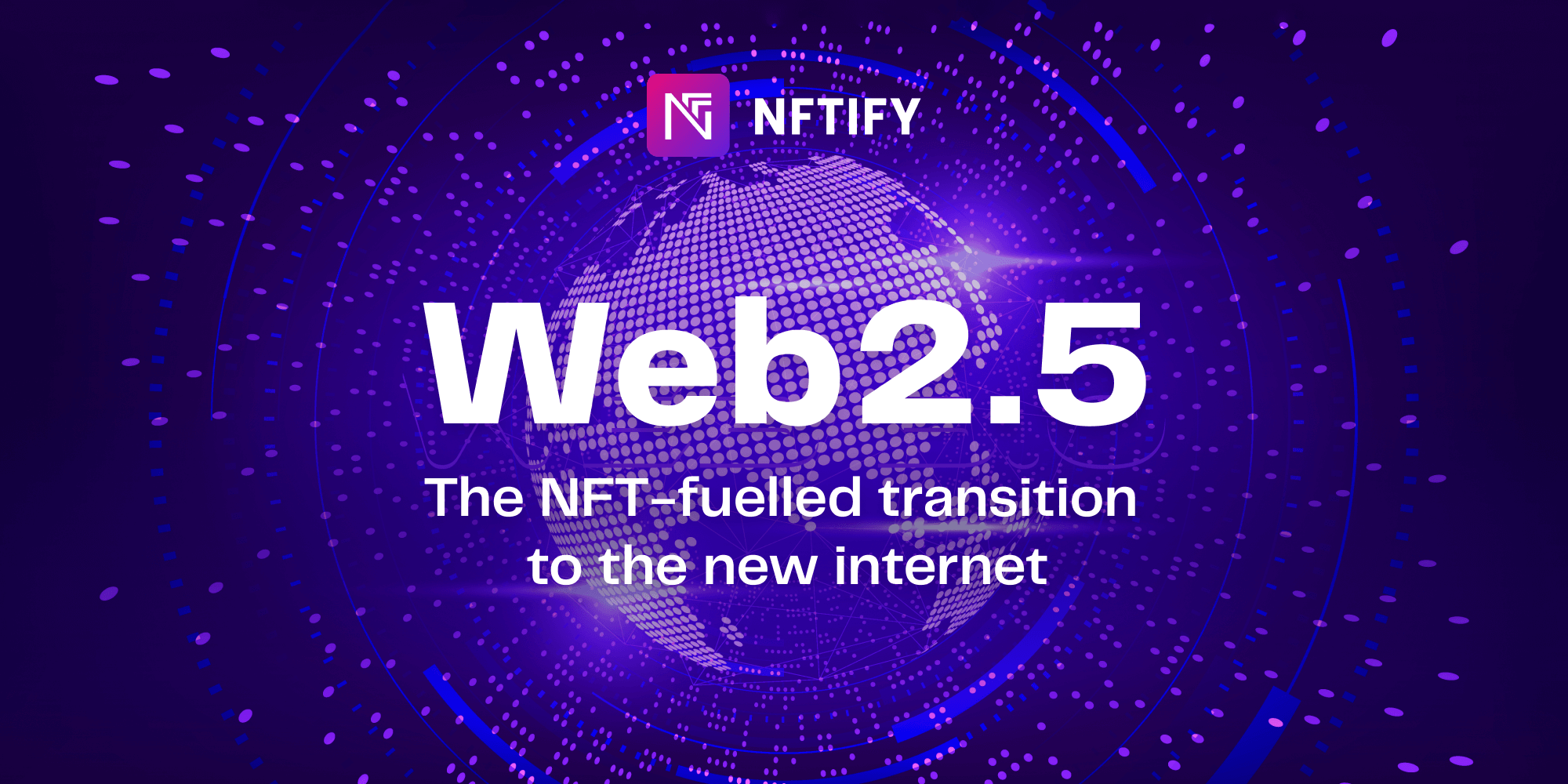 The much-needed transition that is Web2.5

NFT as the centerpiece of Web2.5

How to quickly onboard Web2.5 with NFTs

The term “Web3” represents a user-owned online future, with your personal data detached from tech giants like Google, Facebook and Amazon. However, as that future is still in the making, we see brands around taking exploratory steps instead of a full-on adoption. This movement has a name for itself: Web2.5.

In this article, we’ll find out what Web2.5 is, how NFT is making it happen as the main driving force, and how your business can quickly jump on the hype train to a decentralized future.

Figuring that this is no easy topic, in this section, we’ll dive more into the evolution of the world wide web, to help you gain a better understanding of all these “web terms” flying around.

The early days of the Web, Web 1.0, can be regarded as the stone age era of the Web. Information was provided in a relatively straightforward way – in simple web pages without all the eye candies we have now. Even now, Web 1.0 is still the foundation for the Web since all webpages are still built upon the HTML structure and rely on it to give its pages a proper structure.

Most of what you see on the Web right now can be classified in the second stage of the Web, which is built to promote interactive experiences between the user and the web. Instead of providing read-only content, 2.0 websites are built more like platforms to promote user-generated content and create communities.

Despite still being at the development stage, it’s clear that the next turn for the web will be blockchain-based as the technology addresses the current problem with Web2 – ownership. Users don’t need to rely on a handful of companies to make the decision for them, and they’ll have more freedom to develop and monetize their content the way they want.

Web3 is expected to be:

To sum up, the defining traits of the three web evolutions are summarized as follows:

The much-needed transition that is Web2.5

Web3 is still a work in progress

Unlike the jump from Web1 to Web2 which was mostly about the transition from read-only web pages to more interactive web pages aka the social, user-experience-focused web that we have now, the jump from Web2 to Web3 is a lot more complicated. There are already millions of websites when the concept of Web3 was created by Ethereum co-founder Gavin Wood back in 2014 - shifting the power balance for them all is not an easy task.

It’s a long way ahead for Web3 to reach maturity, and for developers to build the compatible tech stack to redefine the web. And that’s why we need certain stop-gaps, filled with innovations that are not too overwhelming and alienating to the average user.

Hence the need for Web2.5

Web2 already established a model on development and promotion, meanwhile, Web3 offers appealing benefits but not without the volatile nature. That’s why brands are taking a cautious approach to examine the Web3 potential without replacing its existing infrastructure. This means adoption of Web3 technologies and assets within the Web2 infrastructure - the definition of Web2.5. As the midway point between Web2 and Web3, Web2.5 is seeing a constant upward trend of brand adoption, with NFT as the most popular asset.

Why NFT? Let’s find out in the next section.

NFT as the centerpiece of Web2.5

Short for non-fungible tokens, NFT is the blockchain application that takes digital content and assets - usually created and distributed in Web2 environments - to the next level. NFT encompasses Web3’s true ownership and decentralization, combined with various NFT utilities, allowing creators to have total control over their works.

NFT really took off in late 2021, and it's gradually stabilizing despite the crypto winter.

NFT use cases from major brands

One of the most successful uses of NFT on social network platforms. The release of CryptoSnoos, Reddit’s NFT collection, has attracted over 3 million users creating crypto wallets to purchase them, raking in an estimated $2.5 million in revenue (secondary sales not included!). A CryptoSnoo can be used as the avatar of the owner’s Reddit account, topped by a distinct glowing animation.

With the new Starbucks Odyssey reward program, members will be rewarded for completing journeys with ‘journey stamps’, in the form of NFTs. Additionally, there’s also a built-in NFT marketplace in the Starbucks Odyssey web app experience, and the best thing is that there’s almost no barriers at all for participating members – anyone can buy NFTs with their credit cards in the dedicated NFT marketplace , no crypto wallet or cryptocurrency is required.

The Italian luxury fashion brand has not one, but a number of initiatives toward the decentralized web. In addition to collaborations with NFT projects like 10KTF and Superplastic, Gucci also partnered with metaverse platforms to launch their own virtual spaces.

The Australian Open is the first Grand Slam to expand the tournament experience into the realms of NFTs sport and Metaverse. Its AO NFT collection consists of 6,776 unique “Art Balls”, each comes with digital ownership, a physical ball, a small plot of virtual land and other exclusive perks.

And that’s just a few examples - the brand list is ever-growing!

How to quickly onboard Web2.5 with NFTs

For NFTs to become common goods, bought and owned by millions of people daily, the trading process needs to be simplified and streamlined as much as possible. As talented team all around the world are coming up with creative solutions, here are some that we deem noteworthy.

There are two types of crypto wallets: Custodial with a third-party holding your private keys, and non-custodial giving you full control of them. Custodial wallets are more beginner-friendly as they can be integrated into the website, meaning users don’t even have to open a new tab to create and interact with their wallets. Third-party services also help newcomers better manage their accounts, without having to learn the crypto world inside out.

Some popular examples of this are Coinbase, Crossmint, Binance and Kraken.

Even though the Web3 vision is crypto-reliant, the current Web2.5 still requires fiat payment to make NFT transactions more common and convenient. Buying digital assets is more appealing to the mass when paired with real-life value and a simple swipe of the card - just like on Amazon!

Stripe is the first Web2 fintech solution to adopt crypto payment, along with some notable Web3 solutions such as MoonPay, Switchere and Wert. The NFT marketplace Nifty Gateway even takes it one step further, allowing its creators to withdraw revenue directly in USD. This small but powerful feature makes it possible for established businesses to officially record NFT revenue in their cashflow statement.

Traditionally, putting NFT on the blockchain (the so-called act of minting) required its creator to pay a calculated gas fee. Nonetheless, other solutions have since then emerged to eliminate this upfront cost, allowing creators to freely experiment with their NFTs.

Lazy minting solutions like Mintable make the NFT available off-chain and only minted post-purchase. On the other hand, the fees can also be waived with NFT Minter tool on the Polygon chain, or entrusted to a third-party with Biconomy’s gasless transactions feature.

Learn more about gas fees and how gasless transactions are possible with this article.

Feeling like an NFT marketplace is too much work?
Let our experts simplify it for you.

As we’re moving towards Web3, Web2.5 is becoming increasingly important as that in-between stage where brands try out what works and what doesn’t. And from the first few tries, it looks like NFT is the way for brands to promote decentralization and bring value to the community simultaneously.

Looking to launch your first Web3 experiment with NFTs? Get your NFT collection the website it deserves with NFTify, the most powerful NFT marketplace builder with 40+ robust features, fiat payment and gasless transactions included. No coding, no upfront cost required. Create your free NFT marketplace today!